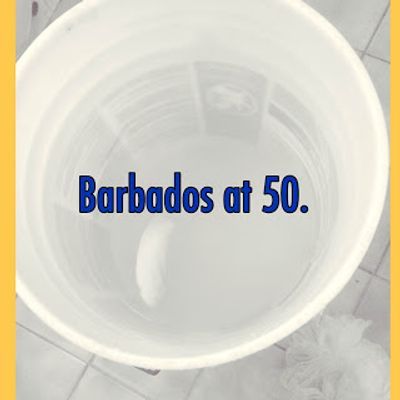 Happy 50th Birthday Barbados!!!
Before the pitch forks come out, let me first affirm- I am proud to be a Bajan. As such, I thought I would (and should) be excited about the fact that we are quickly approaching our 50th year of Independence. But, I’m not. Why? The water woes at home and what they represent, for me, are indicative of classism and a lack of government financial and socio-economic prioritization and infrastructure. The aforementioned are needed to grant our fellow countrymen what they all should have as human beings, with basic human rights and needs- access to (clean) water and the affirmation and validation of their human dignity. Better yet, let’s keep it simple given the apparent “drought,” access to not even clean water, but to water- period.
This post has been brewing for a while, since the above picture was taken- on a trip home in March of 2016 for just over a week, where the water was off without warning, notice, or billing adjustments to account for lack of access on more than one occasion. For those who may not know, I’m a country girl, from St. Thomas, where the pipe being off has now become more of a norm and less of an exception. The water woes have continued and have become progressively worst, with residents continually being charged and bills even increasing, for water they have not had access to and therefore not used. Some for a day, others for days on end.
Why such a big deal over water access? It lends to the upkeep and valuing of human dignity, cleanliness, and health. We all know how invigorating a fresh bath can be, the confidence booster it has. Imagine having to care for a family with little to no access to water, without notice or financial reimbursement for lack of access, on any given day, without notice?
I encourage all Bajans at home and those “over ‘n away,” to think critically (myself included)…Outside of all the pomp, circumstance, and national pride, what does 50 years of Independence really mean when the average citizen is without access to a right for humans as basic as water? Where those delegated to advocate for our citizens are pushing for privatization, pushing the onus onto the citizens instead of where it ought to be, on government and its representatives.
Our people are being denied access to a resource that is considered a basic human right, AND have to pay for that lack of access. What will it take? 50 years down, how many more to go?
(This article was originally published on October 14, 2016)